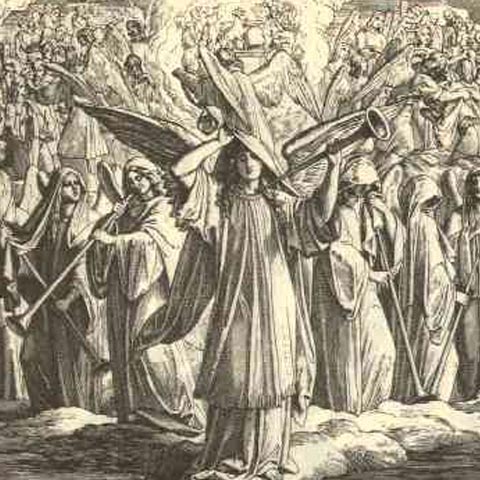 The 6th in a series based on the Book of Revelation.

1 And the fifth angel blew his trumpet, and I saw a star fallen from heaven to earth, and he was given the key to the shaft of the bottomless pit. 2 He opened the shaft of the bottomless pit, and from the shaft rose smoke like the smoke of a great furnace, and the sun and the air were darkened with the smoke from the shaft. 3 Then from the smoke came locusts on the earth, and they were given power like the power of scorpions of the earth. 4 They were told not to harm the grass of the earth or any green plant or any tree, but only those people who do not have the seal of God on their foreheads. 5 They were allowed to torment them for five months, but not to kill them, and their torment was like the torment of a scorpion when it stings someone. 6 And in those days people will seek death and will not find it. They will long to die, but death will flee from them. 7 In appearance the locusts were like horses prepared for battle: on their heads were what looked like crowns of gold; their faces were like human faces, 8 their hair like women’s hair, and their teeth like lions’ teeth; 9 they had breastplates like breastplates of iron, and the noise of their wings was like the noise of many chariots with horses rushing into battle. 10 They have tails and stings like scorpions, and their power to hurt people for five months is in their tails. 11 They have as king over them the angel of the bottomless pit. His name in Hebrew is Abaddon, and in Greek he is called Apollyon. 12 The first woe has passed; behold, two woes are still to come. 13 Then the sixth angel blew his trumpet, and I heard a voice from the four horns of the golden altar before God, 14 saying to the sixth angel who had the trumpet, “Release the four angels who are bound at the great river Euphrates.” 15 So the four angels, who had been prepared for the hour, the day, the month, and the year, were released to kill a third of mankind. 16 The number of mounted troops was twice ten thousand times ten thousand; I heard their number. 17 And this is how I saw the horses in my vision and those who rode them: they wore breastplates the color of fire and of sapphire and of sulfur, and the heads of the horses were like lions’ heads, and fire and smoke and sulfur came out of their mouths. 18 By these three plagues a third of mankind was killed, by the fire and smoke and sulfur coming out of their mouths. 19 For the power of the horses is in their mouths and in their tails, for their tails are like serpents with heads, and by means of them they wound. 20 The rest of mankind, who were not killed by these plagues, did not repent of the works of their hands nor give up worshiping demons and idols of gold and silver and bronze and stone and wood, which cannot see or hear or walk, 21 nor did they repent of their murders or their sorceries or their sexual immorality or their thefts. [Rev 9:1-21 ESV]

1 Then I saw another mighty angel coming down from heaven, wrapped in a cloud, with a rainbow over his head, and his face was like the sun, and his legs like pillars of fire. 2 He had a little scroll open in his hand. And he set his right foot on the sea, and his left foot on the land, 3 and called out with a loud voice, like a lion roaring. When he called out, the seven thunders sounded. 4 And when the seven thunders had sounded, I was about to write, but I heard a voice from heaven saying, “Seal up what the seven thunders have said, and do not write it down.” 5 And the angel whom I saw standing on the sea and on the land raised his right hand to heaven 6 and swore by him who lives forever and ever, who created heaven and what is in it, the earth and what is in it, and the sea and what is in it, that there would be no more delay, 7 but that in the days of the trumpet call to be sounded by the seventh angel, the mystery of God would be fulfilled, just as he announced to his servants the prophets. 8 Then the voice that I had heard from heaven spoke to me again, saying, “Go, take the scroll that is open in the hand of the angel who is standing on the sea and on the land.” 9 So I went to the angel and told him to give me the little scroll. And he said to me, “Take and eat it; it will make your stomach bitter, but in your mouth it will be sweet as honey.” 10 And I took the little scroll from the hand of the angel and ate it. It was sweet as honey in my mouth, but when I had eaten it my stomach was made bitter. 11 And I was told, “You must again prophesy about many peoples and nations and languages and kings.” [Rev 10:1-11 ESV]

1 Then I was given a measuring rod like a staff, and I was told, “Rise and measure the temple of God and the altar and those who worship there, 2 but do not measure the court outside the temple; leave that out, for it is given over to the nations, and they will trample the holy city for forty-two months. 3 And I will grant authority to my two witnesses, and they will prophesy for 1,260 days, clothed in sackcloth.” 4 These are the two olive trees and the two lampstands that stand before the Lord of the earth. 5 And if anyone would harm them, fire pours from their mouth and consumes their foes. If anyone would harm them, this is how he is doomed to be killed. 6 They have the power to shut the sky, that no rain may fall during the days of their prophesying, and they have power over the waters to turn them into blood and to strike the earth with every kind of plague, as often as they desire. 7 And when they have finished their testimony, the beast that rises from the bottomless pit will make war on them and conquer them and kill them, 8 and their dead bodies will lie in the street of the great city that symbolically is called Sodom and Egypt, where their Lord was crucified. 9 For three and a half days some from the peoples and tribes and languages and nations will gaze at their dead bodies and refuse to let them be placed in a tomb, 10 and those who dwell on the earth will rejoice over them and make merry and exchange presents, because these two prophets had been a torment to those who dwell on the earth. 11 But after the three and a half days a breath of life from God entered them, and they stood up on their feet, and great fear fell on those who saw them. 12 Then they heard a loud voice from heaven saying to them, “Come up here!” And they went up to heaven in a cloud, and their enemies watched them. 13 And at that hour there was a great earthquake, and a tenth of the city fell. Seven thousand people were killed in the earthquake, and the rest were terrified and gave glory to the God of heaven. 14 The second woe has passed; behold, the third woe is soon to come. 15 Then the seventh angel blew his trumpet, and there were loud voices in heaven, saying, “The kingdom of the world has become the kingdom of our Lord and of his Christ, and he shall reign forever and ever.” 16 And the twenty-four elders who sit on their thrones before God fell on their faces and worshiped God, 17 saying, “We give thanks to you, Lord God Almighty, who is and who was, for you have taken your great power and begun to reign. 18 The nations raged, but your wrath came, and the time for the dead to be judged, and for rewarding your servants, the prophets and saints, and those who fear your name, both small and great, and for destroying the destroyers of the earth.” 19 Then God’s temple in heaven was opened, and the ark of his covenant was seen within his temple. There were flashes of lightning, rumblings, peals of thunder, an earthquake, and heavy hail. [Rev 11:1-19 ESV]