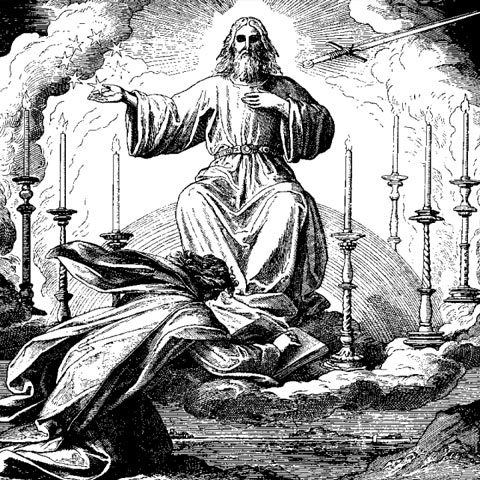 The 2nd in a series based on the Book of Revelation.

13 and in the midst of the lampstands one like a son of man, clothed with a long robe and with a golden sash around his chest.
14 The hairs of his head were white, like white wool, like snow. His eyes were like a flame of fire,
15 his feet were like burnished bronze, refined in a furnace, and his voice was like the roar of many waters.
16 In his right hand he held seven stars, from his mouth came a sharp two-edged sword, and his face was like the sun shining in full strength.
17 When I saw him, I fell at his feet as though dead. But he laid his right hand on me, saying, “Fear not, I am the first and the last,
18 and the living one. I died, and behold I am alive forevermore, and I have the keys of Death and Hades.
19 Write therefore the things that you have seen, those that are and those that are to take place after this.
20 As for the mystery of the seven stars that you saw in my right hand, and the seven golden lampstands, the seven stars are the angels of the seven churches, and the seven lampstands are the seven churches.