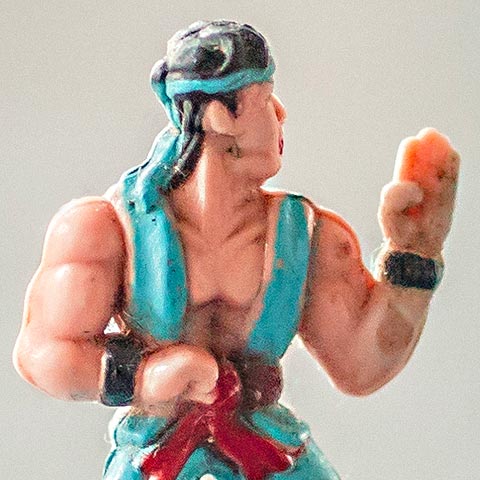 15 The Lord God took the man and put him in the garden of Eden to work it and keep it. 16 And the Lord God commanded the man, saying, “You may surely eat of every tree of the garden, 17 but of the tree of the knowledge of good and evil you shall not eat, for in the day that you eat of it you shall surely die.”

18 Then the Lord God said, “It is not good that the man should be alone; I will make him a helper fit for him.”

21 So the Lord God caused a deep sleep to fall upon the man, and while he slept took one of his ribs and closed up its place with flesh. 22 And the rib that the Lord God had taken from the man he made into a woman and brought her to the man. 23 Then the man said,

“This at last is bone of my bones
and flesh of my flesh;
she shall be called Woman,
because she was taken out of Man.”

24 Therefore a man shall leave his father and his mother and hold fast to his wife, and they shall become one flesh. 25 And the man and his wife were both naked and were not ashamed.

1 Now the serpent was more crafty than any other beast of the field that the Lord God had made.

He said to the woman, “Did God actually say, ‘You shall not eat of any tree in the garden’?” 2 And the woman said to the serpent, “We may eat of the fruit of the trees in the garden, 3 but God said, ‘You shall not eat of the fruit of the tree that is in the midst of the garden, neither shall you touch it, lest you die.’” 4 But the serpent said to the woman, “You will not surely die. 5 For God knows that when you eat of it your eyes will be opened, and you will be like God, knowing good and evil.” 6 So when the woman saw that the tree was good for food, and that it was a delight to the eyes, and that the tree was to be desired to make one wise, she took of its fruit and ate, and she also gave some to her husband who was with her, and he ate. 7 Then the eyes of both were opened, and they knew that they were naked. And they sewed fig leaves together and made themselves loincloths.

“I will surely multiply your pain in childbearing;
in pain you shall bring forth children.
Your desire shall be for your husband,
and he shall rule over you.”

3 In the course of time Cain brought to the Lord an offering of the fruit of the ground, 4 and Abel also brought of the firstborn of his flock and of their fat portions. And the Lord had regard for Abel and his offering, 5 but for Cain and his offering he had no regard. So Cain was very angry, and his face fell. 6 The Lord said to Cain, “Why are you angry, and why has your face fallen? 7 If you do well, will you not be accepted? And if you do not do well, sin is crouching at the door. Its desire is for you, but you must rule over it.”

8 Cain spoke to Abel his brother. And when they were in the field, Cain rose up against his brother Abel and killed him.

17 These people are springs without water and mists driven by a storm. Blackest darkness is reserved for them. 18 For they mouth empty, boastful words and, by appealing to the lustful desires of the flesh, they entice people who are just escaping from those who live in error. 19 They promise them freedom, while they themselves are slaves of depravity—for “people are slaves to whatever has mastered them.” 20 If they have escaped the corruption of the world by knowing our Lord and Savior Jesus Christ and are again entangled in it and are overcome, they are worse off at the end than they were at the beginning. 21 It would have been better for them not to have known the way of righteousness, than to have known it and then to turn their backs on the sacred command that was passed on to them. 22 Of them the proverbs are true: “A dog returns to its vomit,” and, “A sow that is washed returns to her wallowing in the mud.”

24 “‘For I will take you out of the nations; I will gather you from all the countries and bring you back into your own land. 25 I will sprinkle clean water on you, and you will be clean; I will cleanse you from all your impurities and from all your idols. 26 I will give you a new heart and put a new spirit in you; I will remove from you your heart of stone and give you a heart of flesh. 27 And I will put my Spirit in you and move you to follow my decrees and be careful to keep my laws. 28 Then you will live in the land I gave your ancestors; you will be my people, and I will be your God. 29 I will save you from all your uncleanness. I will call for the grain and make it plentiful and will not bring famine upon you.

15 What then? Shall we sin because we are not under the law but under grace? By no means! 16 Don’t you know that when you offer yourselves to someone as obedient slaves, you are slaves of the one you obey—whether you are slaves to sin, which leads to death, or to obedience, which leads to righteousness? 17 But thanks be to God that, though you used to be slaves to sin, you have come to obey from your heart the pattern of teaching that has now claimed your allegiance. 18 You have been set free from sin and have become slaves to righteousness.

1-2 Since Jesus went through everything you’re going through and more, learn to think like him. Think of your sufferings as a weaning from that old sinful habit of always expecting to get your own way. Then you’ll be able to live out your days free to pursue what God wants instead of being tyrannized by what you want.

3-5 You’ve already put in your time in that God-ignorant way of life, partying night after night, a drunken and profligate life. Now it’s time to be done with it for good. Of course, your old friends don’t understand why you don’t join in with the old gang anymore. But you don’t have to give an account to them. They’re the ones who will be called on the carpet—and before God himself.

8 For we do not want you to be unaware, brothers, of the affliction we experienced in Asia. For we were so utterly burdened beyond our strength that we despaired of life itself. 9 Indeed, we felt that we had received the sentence of death. But that was to make us rely not on ourselves but on God who raises the dead. 10 He delivered us from such a deadly peril, and he will deliver us. On him we have set our hope that he will deliver us again.

7 So to keep me from becoming conceited because of the surpassing greatness of the revelations, a thorn was given me in the flesh, a messenger of Satan to harass me, to keep me from becoming conceited. 8 Three times I pleaded with the Lord about this, that it should leave me. 9 But he said to me, “My grace is sufficient for you, for my power is made perfect in weakness.” Therefore I will boast all the more gladly of my weaknesses, so that the power of Christ may rest upon me.