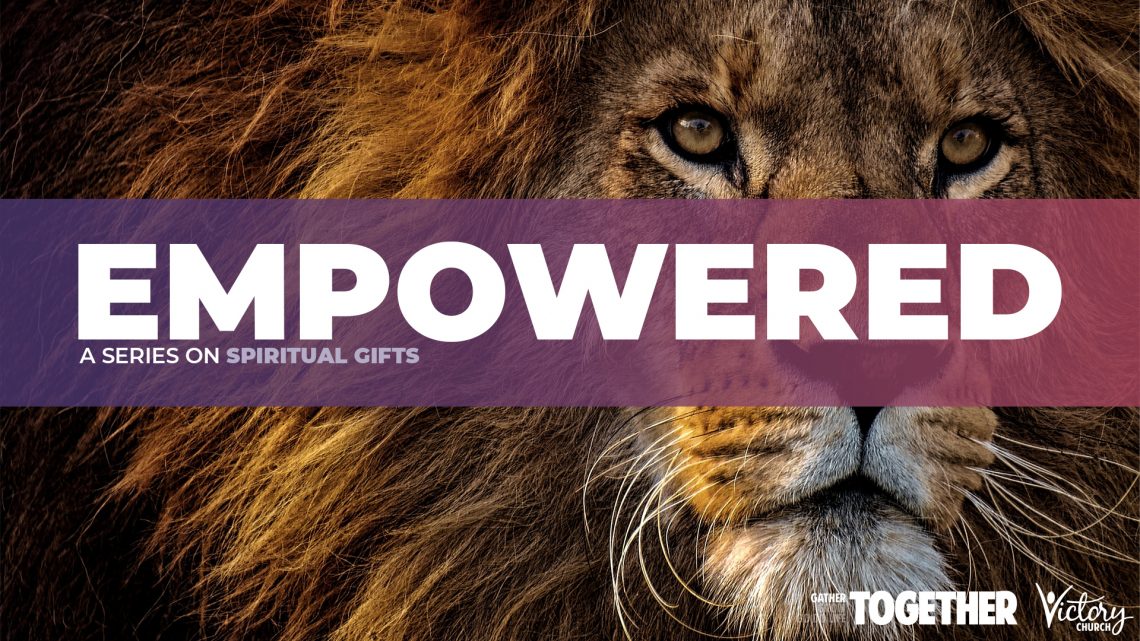  
1 Corinthians 12:1-11 (ESV)
12 Now concerning[a] spiritual gifts,[b] brothers,[c] I do not want you to be uninformed. 2 You know that when you were pagans you were led astray to mute idols, however you were led. 3 Therefore I want you to understand that no one speaking in the Spirit of God ever says “Jesus is accursed!” and no one can say “Jesus is Lord” except in the Holy Spirit.

Genesis 41:33-36 (ESV)
33 Now therefore let Pharaoh select a discerning and wise man, and set him over the land of Egypt. 34 Let Pharaoh proceed to appoint overseers over the land and take one-fifth of the produce of the land[a] of Egypt during the seven plentiful years. 35 And let them gather all the food of these good years that are coming and store up grain under the authority of Pharaoh for food in the cities, and let them keep it. 36 That food shall be a reserve for the land against the seven years of famine that are to occur in the land of Egypt, so that the land may not perish through the famine.”

John 4:16-26 (ESV)
16 Jesus said to her, “Go, call your husband, and come here.” 17 The woman answered him, “I have no husband.” Jesus said to her, “You are right in saying, ‘I have no husband’; 18 for you have had five husbands, and the one you now have is not your husband. What you have said is true.” 19 The woman said to him, “Sir, I perceive that you are a prophet. 20 Our fathers worshiped on this mountain, but you say that in Jerusalem is the place where people ought to worship.” 21 Jesus said to her, “Woman, believe me, the hour is coming when neither on this mountain nor in Jerusalem will you worship the Father. 22 You worship what you do not know; we worship what we know, for salvation is from the Jews. 23 But the hour is coming, and is now here, when the true worshipers will worship the Father in spirit and truth, for the Father is seeking such people to worship him. 24 God is spirit, and those who worship him must worship in spirit and truth.” 25 The woman said to him, “I know that Messiah is coming (he who is called Christ). When he comes, he will tell us all things.” 26 Jesus said to her, “I who speak to you am he.”

1 Corinthians 12:9 (ESV)
9 to another faith by the same Spirit, to another gifts of healing by the one Spirit,
1 Corinthians 13:2 (ESV)
2 And if I have prophetic powers, and understand all mysteries and all knowledge, and if I have all faith, so as to remove mountains, but have not love, I am nothing.
Daniel 3:16-18 (ESV)
16 Shadrach, Meshach, and Abednego answered and said to the king, “O Nebuchadnezzar, we have no need to answer you in this matter. 17 If this be so, our God whom we serve is able to deliver us from the burning fiery furnace, and he will deliver us out of your hand, O king.[a] 18 But if not, be it known to you, O king, that we will not serve your gods or worship the golden image that you have set up.”

1 Corinthians 12:9 (ESV)
9 to another faith by the same Spirit, to another gifts of healing by the one Spirit,
1 Corinthians 12:28 (ESV)
28 And God has appointed in the church first apostles, second prophets, third teachers, then miracles, then gifts of healing, helping, administrating, and various kinds of tongues.
Acts 3:1-10 (ESV)
3 Now Peter and John were going up to the temple at the hour of prayer, the ninth hour.[a] 2 And a man lame from birth was being carried, whom they laid daily at the gate of the temple that is called the Beautiful Gate to ask alms of those entering the temple. 3 Seeing Peter and John about to go into the temple, he asked to receive alms. 4 And Peter directed his gaze at him, as did John, and said, “Look at us.” 5 And he fixed his attention on them, expecting to receive something from them. 6 But Peter said, “I have no silver and gold, but what I do have I give to you. In the name of Jesus Christ of Nazareth, rise up and walk!” 7 And he took him by the right hand and raised him up, and immediately his feet and ankles were made strong. 8 And leaping up, he stood and began to walk, and entered the temple with them, walking and leaping and praising God. 9 And all the people saw him walking and praising God, 10 and recognized him as the one who sat at the Beautiful Gate of the temple, asking for alms. And they were filled with wonder and amazement at what had happened to him.

1 Corinthians 12:10 (ESV)
10 to another the working of miracles, to another prophecy, to another the ability to distinguish between spirits, to another various kinds of tongues, to another the interpretation of tongues.
1 Corinthians 12:28 (ESV)
28 And God has appointed in the church first apostles, second prophets, third teachers, then miracles, then gifts of healing, helping, administrating, and various kinds of tongues.
Matthew 14:13-21 (ESV)
13 Now when Jesus heard this, he withdrew from there in a boat to a desolate place by himself. But when the crowds heard it, they followed him on foot from the towns. 14 When he went ashore he saw a great crowd, and he had compassion on them and healed their sick. 15 Now when it was evening, the disciples came to him and said, “This is a desolate place, and the day is now over; send the crowds away to go into the villages and buy food for themselves.” 16 But Jesus said, “They need not go away; you give them something to eat.” 17 They said to him, “We have only five loaves here and two fish.” 18 And he said, “Bring them here to me.” 19 Then he ordered the crowds to sit down on the grass, and taking the five loaves and the two fish, he looked up to heaven and said a blessing. Then he broke the loaves and gave them to the disciples, and the disciples gave them to the crowds. 20 And they all ate and were satisfied. And they took up twelve baskets full of the broken pieces left over. 21 And those who ate were about five thousand men, besides women and children.
Category Empowered, Pastor Toby Cox, Series, Sunday Morning Service, Victory Church
Tags 1 Corinthians, Acts, Daniel, Genesis, John, Matthew, Pastor Toby Cox