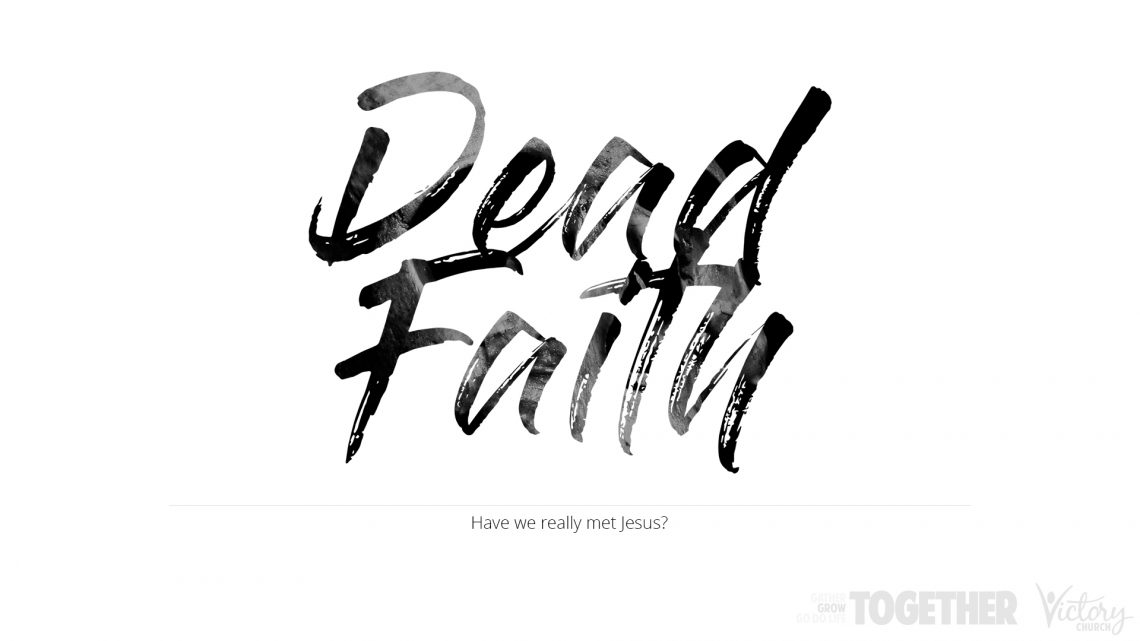  
James 2:14-20 (KJV)
14 What doth it profit, my brethren, though a man say he hath faith, and have not works? can faith save him? 15 If a brother or sister be naked, and destitute of daily food, 16 And one of you say unto them, Depart in peace, be ye warmed and filled; notwithstanding ye give them not those things which are needful to the body; what doth it profit? 17 Even so faith, if it hath not works, is dead, being alone.

18 Yea, a man may say, Thou hast faith, and I have works: shew me thy faith without thy works, and I will shew thee my faith by my works. 19 Thou believest that there is one God; thou doest well: the devils also believe, and tremble. 20 But wilt thou know, O vain man, that faith without works is dead?

1. Faith without works is dead.

Why are we going through this?

I want us to answer some questions:

James 1:14-15 (KJV)
14 But every man is tempted, when he is drawn away of his own lust, and enticed. 15 Then when lust hath conceived, it bringeth forth sin: and sin, when it is finished, bringeth forth death.
Isaiah 1:2,5-6 (KJV)
2 Hear, O heavens, and give ear, O earth:
for the LORD hath spoken,
I have nourished and brought up children,
and they have rebelled against me.

5 Why should ye be stricken any more?
ye will revolt more and more:
the whole head is sick, and the whole heart faint.
6 From the sole of the foot even unto the head there is no soundness in it;
but wounds, and bruises, and putrifying sores:
they have not been closed, neither bound up, neither mollified with ointment.

Isaiah 52:13-14 (KJV)
13 Behold, my servant shall deal prudently,
he shall be exalted and extolled, and be very high.
14 As many were astonied at thee;
his visage was so marred more than any man,
and his form more than the sons of men:

“Jesus’ physical form was so marred that He lost the appearance of a human being. From the crown of His head to the soles of His feet were nothing but ‘wounds and bruises and putrefying sores.’

Why was His appearance ‘disfigured beyond that of any man and his form marred beyond human likeness’? Because that is the outworking of rebellion. In one vivid picture God conveys to us the fact that, on the cross, Jesus bore our rebellion and all its evil consequences. Don’t believe pretty religious pictures about the crucifixion. It consisted of wounds and bruises and putrefying sores. The wounds were open and they were septic. Why? Because the rebellion of us all was visited on Him. The next time you and I attempt to rebel, may God give us a picture of the end of rebellion. Jesus as the last Adam took that rebellion, died and was buried with it. When He rose again, He rose as the second Man, the head of a new [creation]…

Say that aloud now… ‘On the cross Jesus bore our rebellion and all its evil consequences.’

If you really believe what you just said, you have one more thing to say: ‘Thank You, Lord Jesus!’ Amen.”

– Derek Prince, “Bought with Blood: The Divine Exchange at the Cross”

Ephesians 2:1-10 (KJV)
1 And you hath he quickened, who were dead in trespasses and sins; 2 Wherein in time past ye walked according to the course of this world, according to the prince of the power of the air, the spirit that now worketh in the children of disobedience: 3 Among whom also we all had our conversation in times past in the lusts of our flesh, fulfilling the desires of the flesh and of the mind; and were by nature the children of wrath, even as others.

4 But God, who is rich in mercy, for his great love wherewith he loved us, 5 Even when we were dead in sins, hath quickened us together with Christ, (by grace ye are saved;) 6 And hath raised us up together, and made us sit together in heavenly places in Christ Jesus: 7 That in the ages to come he might shew the exceeding riches of his grace in his kindness toward us through Christ Jesus. 8 For by grace are ye saved through faith; and that not of yourselves: it is the gift of God: 9 Not of works, lest any man should boast. 10 For we are his workmanship, created in Christ Jesus unto good works, which God hath before ordained that we should walk in them.

2. We are saved by grace, through faith, not by works.

James 1:22-25 (KJV)
22 But be ye doers of the word, and not hearers only, deceiving your own selves. 23 For if any be a hearer of the word, and not a doer, he is like unto a man beholding his natural face in a glass: 24 For he beholdeth himself, and goeth his way, and straightway forgetteth what manner of man he was. 25 But whoso looketh into the perfect law of liberty, and continueth therein, he being not a forgetful hearer, but a doer of the work, this man shall be blessed in his deed.
James 2:21-26 (KJV)
21 Was not Abraham our father justified by works, when he had offered Isaac his son upon the altar? 22 Seest thou how faith wrought with his works, and by works was faith made perfect? 23 And the scripture was fulfilled which saith, Abraham believed God, and it was imputed unto him for righteousness: and he was called the Friend of God. 24 Ye see then how that by works a man is justified, and not by faith only.

25 Likewise also was not Rahab the harlot justified by works, when she had received the messengers, and had sent them out another way?

26 For as the body without the spirit is dead, so faith without works is dead also.

Isaiah 59:2 (KJV)
2 But your iniquities have separated between you and your God,
and your sins have hid his face from you, that he will not hear.
Isaiah 53:5 (KJV)
5 But he was wounded for our transgressions,
he was bruised for our iniquities:
the chastisement of our peace was upon him;
and with his stripes we are healed.
James 2:18 (KJV)
18 Yea, a man may say, Thou hast faith, and I have works: shew me thy faith without thy works, and I will shew thee my faith by my works.
James 4:3-5 (KJV)
3 Ye ask, and receive not, because ye ask amiss, that ye may consume it upon your lusts. 4 Ye adulterers and adulteresses, know ye not that the friendship of the world is enmity with God? whosoever therefore will be a friend of the world is the enemy of God. 5 — Do ye think that the scripture saith in vain, The spirit that dwelleth in us lusteth to envy?

What are we called to do?

To answer that question, ask these questions:

2 Corinthians 3:18 (KJV)
18 But we all, with open face beholding as in a glass the glory of the Lord, are changed into the same image from glory to glory, even as by the Spirit of the Lord.
Matthew 28:19-20 (KJV)
19 Go ye therefore, and teach all nations, baptizing them in the name of the Father, and of the Son, and of the Holy Ghost:
20 Teaching them to observe all things whatsoever I have commanded you: and, lo, I am with you always, even unto the end of the world. Amen.
Category Aaron Textor, Sunday Morning Service, Victory Church
Tags 2 Corinthians, Aaron Textor, Ephesians, Isaiah, James, Matthew, Psalms